Embark on the horseback adventure-of-a-lifetime with a true “Out of Africa” experience – riding the endless plains of the Serengeti.

You will start your horse-riding adventure near Arusha, just a short drive from Mt Kilimanjaro International Airport, spending your first night at a permanent camp to get aquainted with Africa. Then the adventure begins with a scenic flight that will give you a birds eye view of some of Tanzania’s most incredible wildlife areas before landing in the Serengeti area.

Meaning “endless plains” in Masai, the Serengeti is the Africa most people dream of. You will return to the “safari of old” following the herds of wildebeest, zebra and gazelle as they embark on their annual migration. These rides are scheduled to offer riders the best chance to see this incredible spectacle on horseback. Explore some of the last true wildernesses on earth, as you become part of a herd of cantering zebra, creep up on a munching elephant or gaze up in wonder at a tall giraffe. If you are lucky, you might be able to witness the miracle and drama of calving season with thousands of wobbly calves born in a matter of weeks, and plenty of big cat sightings as they are drawn by the smell of new life.

This ride promises some incredible game viewing! Trail riding, with the assistance of a mobile camp set-up, and spending 7 nights watching sunsets, sitting round campfires and sleeping out in the wilderness will be an adventure like no other! This is a challenging ride for experienced riders only as you will be riding in areas with big game.

Meaning “endless plains” in Maasai, the Serengeti is the Africa most people dream of. Here you can witness the natural phenomenon as millions of wildebeest, zebra and gazelle embark on their annual migration. Depending on the time of year, watch the magic and drama unfold during the calving season, or stand mesmerized by their death-defying leaps across crocodile infested rivers. Become part of the herd as you gallop across the plains, keeping a keen eye out for the big cats that thrive here. This is one of those very rare places that somehow manages to surpass expectations and take your breath away.

Scheduled Departures in the early months of the year to coincide with the migration.

Please be aware of that the ride below is for STRONG INTERMEDIATE RIDERS only and that each itinerary is subject to change due to movement of game and whether conditions. The routes are designed for the best possibilities of viewing wildlife and follow suitable terrain for horses. If the itinerary would change prior to the safari, this would only be for the safety and to the benefit of the journey on horseback.

Please note that although this is an example of the itinerary planned it is only an example and day-by-day arrangements, camp locations and routes will be varied by your guide in her absolute discretion according to the weather, game movements or if other local conditions require. This is left to the experience and discretion of your guide.

Arrival at Kilimanjaro International Airport followed by a short transfer to your first base for the night. Located on a wildlife estate with great views of Mt Meru, and on a clear day Mt Kilimanjaro, the lodge is the perfect place to get acquainted with Africa. Here you will have some free time to relax and get to know your fellow adventurers! Over dinner you will be joined by the lead guide who will give a quick introduction and an overview of what to expect during the course of your safari.

An early start to catch a morning charter flight to one of the airstrips in the southern Serengeti. You may be flown over the Ngorongoro Crater, Lake Manayara or Tarangire National Park -a wonderful opportunity to see these iconic sites from the air! After the flight, you will be met by a safari vehicle for your game drive to the camp. Depending on where you fly in, expect anything from 2-4 hours drive.

A short wait whilst you are checked-in at the National Park registration post, then set off driving through the Ngorongoro Conservation Area past impressive rocky outcrops known as “kopjes , river courses and across the Serengeti’s famous short grass plains. Prime grazing area for migrating wildebeest during the early months of the year, with luck (always dependant on the weather!) the plains may be thick with wildebeest which arrive in their thousands after the rains to make the most of the fresh grass. The plains are also the wildebeests’ favoured birthing spot – it is one of nature’s miracles that females delay giving birth until the rains and grass arrive in an effort to ensure their newly born young get the best start in life, a chance to build their strength on lush new grass before setting off on the long march north to Kenya’s Mara plains.

Leave the National Park and NCA and after a drive of about 2 hours, you’ll arrive at the spot chosen for the first camp in the shade of a lovely flat-topped acacia. Meet the team of support staff, settle into your tents and a welcome lunch in the shade of the mess tent. Then, a short siesta, before meeting the horses and their grooms, and time allowing, an evening ride. Return to camp at sunset for hot showers, drinks by the campfire and your first dinner together in the bush, before the adventure really starts!

You will be woken at daybreak with tea or coffee brought to your tent, then breakfast in the mess tent before heading to the horses to mount up at around 8am. Five more days to explore, riding across the open plains, into grassy valleys dotted with picturesque granite outcrops, swathes of whistling thorn and typically East African flat-topped acacia trees. The route and arrangements each day will vary with the weather and movement of game but your guide will aim to ride to at least one or two more camps so you can discover new areas.

On one of the afternoons or mornings the horses will be given a rest and you jump into the vehicles to visit Olduvai Museum, one of the most important paleoanthropological sites in the world. The museum includes fossils and artifacts of our human ancestors and skeletons of many extinct animals who shared their world. Throughout the safari we will most definitely cross this gorge ‘Cradle of humankind” on one or more occasions on horseback.

The following day, you will have an early wake up at dawn gives you time to pack up before breakfast, then mount up to set off to a new camp, riding through areas that have rarely been visited by anyone except on horseback, perhaps passing Maasai herdsmen or their small settlements, where tribesmen live off the land as they have done for centuries.

After about 4 hours riding, meet the back-up crew for an al- fresco lunch in the bush and time to rest in the heat of the day, before heading off again, aiming to reach the new camp by teatime. Set up ahead by the backup, the camp might be spectacularly situated in the middle of the vast open plains, where, at peak migration time, the air will be filled with the braying and mesmerizing grunts of wildebeest. A cup of tea or a cold beer when you arrive in camp, followed by hot showers & dinner, listening to the sounds of the bush

At one point during the safari (weather allowing) you will spend the night in a lightweight fly camp, sleeping under mosquito nets. This morning you jump into the vehicles (there will be a game drive with a picnic lunch on route, crossing the short grass plains and looking out for cats such as cheetah, lion and leopard which thrive here, as well as elephant and the flamingo which gather on the area’s soda lakes. Later in the afternoon you will reach the fly camp in time for sundowners followed by dinner under the stars.

An early wake-up call to say farewell to the horses and crew. The drive this morning will be up the Ngorongoro highlands and breakfast will be en-route overlooking the world-famous Ngorongoro Crater. After checking out at the gate you head to the African Galleria, a great place to buy anything from arts, tanzanite or just a small Tanzanian gift. Shortly after you head to the Manyara Airstrip followed by a 40 minutes flight back to the estate where lunch will be served. There will be showers available in a shared dayroom however if you like your own dayroom please let us know and we will book this in advance (extra cost – latest departure 18h00) Thereafter vehicle transfer back to Kilimanjaro International Airport for onward flights.

Permanent Lodge: The first night is spent at a lodge situated on a golf, polo and wildlife estate, only 30 minutes drive from the international airport. Each room provides its guests with a delightful mix of comfort, privacy and style, blending together simple, modern colours and furniture with pieces of historic dhow wood from the East African coast. Each room has its own en-suit bathroom, flush toilet and white fluffy towels. There is WIFI and a swimming pool to be enjoyed and SPA treatments and golf can be organized upon request..

Mobile Safari Camp:Embrace bush life with this tented fly camp; you will have a comfortable and spacious tent which has a removable bottom section, offering 360 degree views when open.  The mosquito lining keeps your tent insect proof but allows for ventilation. Each tent has camp beds, cotton linen, a solar light and an outside chair and wash stand. Each tent has its own bush toilet and bucket shower. The toilet is a traditional short drop style toilet. The shower is a traditional star gazing canvas bucket, suspended from a tree inside the shower enclosure. You will be moving camp regularly and at each site the ground team will go ahead and have camp set up by the time you arrive.

WHAT RIDING LEVEL AM I?

Scheduled Departures in the early months of the year to coincide with the migration.

”It was a great, amazing, cool, top experience to ride the Tuliblock in Botswana. 8 day's on a back of a horse and view a lot of game. The guides and staff were great. So I will come back! Fall asleep with your horse tethered nearby Horses getting ready for adventure Three elements of the ultimate adventure

Ride out straight from camp Taking a break on a kopje The Serengeti is known for big cats

Saying goodnight to your steed Sundowners in the Serengeti Campfire stories in the evenings

Wildebeest herds at the water

See the migration from horseback Perfect place for a siesta Epic canters on the endless plains Take a break from the saddle with a game drive The Serengeti is known for big cats How we care for our horses

Our horseback adventures are hand-picked for their quality and care of their horses. Here’s how the horses in Tanzania are kept in tip-top shape for your safaris. Our horses are on top of the hierarchy and receive very special care:

Please let us know if you have any more questions around this. The Lewa Wilderness is perfect for true safari lovers to fully immerse in this very special part of Kenya. 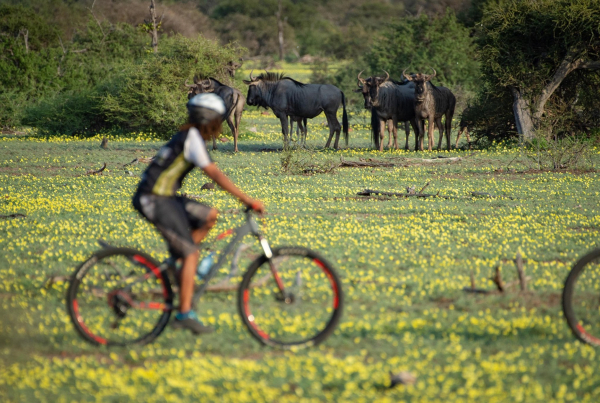 Thrilling riding and cycling through Botswana's most remarkable wilderness.

Ride across the Zambezi River floodplains with herds of zebra, wildebeest and lechwe, before visiting the mighty Victoria Falls.